What are message headers?

Message headers are usually mostly hidden when you read email messages. You normally get shown certain parts of the headers such as From, To, CC, Date/Time and Subject, but there is a whole lot more and it can be very helpful in troubleshooting problems with messages.

The image above shows how we show you the “standard” headers in the Runbox webmail interface. We take the Subject from the email headers and show that on a line of its own at the top of the open messages. Then the Time, From and To sections are filled with information from other headers of the email.

To see the  full headers of the message, you can click on the left button that is shown to the right and on the same line as the subject  in the graphic above. It looks like this: 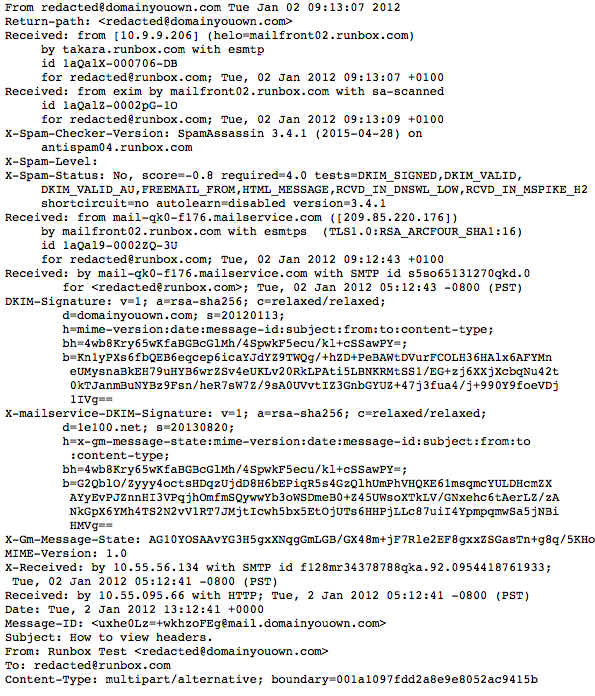 The headers are a complete record of how the message was handled, and each server that dealt with the message from sender to recipient adds its own part to the headers. The headers at the top are actually the last to be added, so to read the headers in chronological order you actually read them from the bottom upwards in sections.

We often ask for headers of a message when you contact Runbox Support, because they can be very helpful or even essential in solving some problems that can occur with messages.

Outlook for Windows: Double-click the message to open it in a new window. Select the File tab, and then click Properties. The data is next to Internet headers.

Outlook for Mac: Right Click on the message and choose View Source.

Apple Mail: View > Message > Raw Source (you can also use All Headers, but we think Raw Source is better as it doesn’t reorganize the headers)